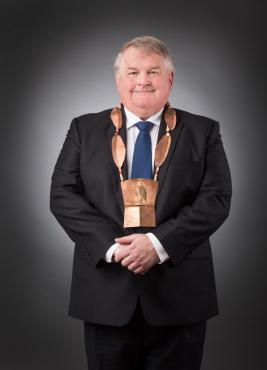 “My daughters attended Yukon College [now Yukon University] before completing their degrees in BC. It was a positive entry into post-secondary education for both of them, as they could remain in Whitehorse, in familiar surroundings. I’ve been an active part of Yukon College since 1985, both as Premier and Minister of Education, and I’m proud to now call myself the first chancellor of Yukon University!”

Piers McDonald began his career as a miner at United Keno Hill Mines in Elsa before entering politics. He was Premier of Yukon from 1996-2000 and as Minister of Education from 1985-1992, Piers was responsible for the passage of the Yukon College Act, the construction of Ayamdigut campus in Whitehorse and oversaw the expansion of community campuses to Carmacks, Haines Junction, Old Crow, Pelly Crossing, Teslin, Faro and Ross River. He also initiated the research role of the College, the Northern Studies program and several university transfer programs. And now he can add his role of supporting the process for Yukon College’s transition to Yukon University.

Piers is founding partner and Chair of the Board of Northern Vision Development, which has developed and constructed multiple commercial and residential buildings in Whitehorse since 2004. He was volunteer president of the 2007 Canada Winter Games Host Society and is an Officer of the Order of Canada. In 2007 Piers was named businessperson of the year by Whitehorse Chamber of Commerce.