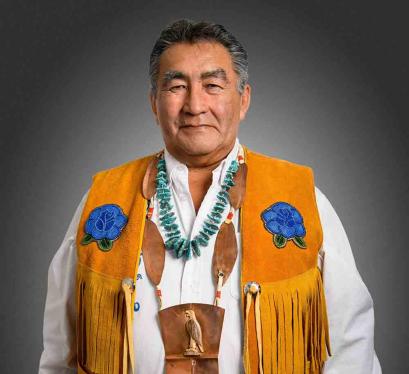 "I am humbled and honoured to take on the role of chancellor of Yukon University. I have long been an advocate for building resources from within to realise the promise of self-government, and indeed Yukon itself. The establishment of Yukon University is a further step towards self-sufficiency for all Yukoners. I look forward to engaging with and serving our students.”

James worked as a tradesperson before entering First Nations politics in the 1980s and becoming a land claims negotiator for Champagne and Aishihik First Nations. Elected Dän nätthe (chief) for two separate, four-year terms in 2002 and 2010, among his achievements Allen partnered with Yukon College to create the Executive Development program which later became the Indigenous Governance degree program, and oversaw the final construction and opening of the Da Kų Culture Centre in Haines Junction, Yukon.

James is a staunch champion for Dän k’e (Southern Tutchone) and has contributed to the revival of this language. For many years, he has operated an annual healing camp for men tackling addictions. Since retiring from politics, alongside his wife, Barbera, Allen operates Shakat Tun Adventures on the Allen family trapline on Kluane Lake—a tourism and guiding business that shares stories and traditional activities with visitors.

The Chancellor is the ceremonial head of the University. Appointed by the Board of Governors, they act as a bridge between the institution, the students and the broader community. The Chancellor is responsible for conferring credentials on each graduating student. The position is voluntary for a term of two years.

Under the Yukon University Act the Chancellor is now a voting member of the Board of Governors and University Senate.