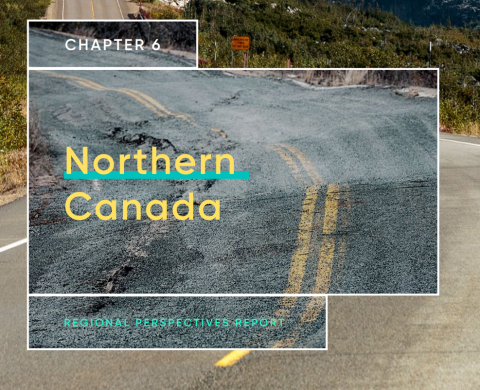 Communities across Northern Canada are witnessing first-hand the devastating impacts a changing climate is having across Arctic ecosystems. Livelihoods, Indigenous culture, social relations, food security, health, well-being      and a way of life, which have existed for generations are all being impacted.

Today, the Honourable Jonathan Wilkinson, Minister of Natural Resources, was joined by his colleagues in releasing the Northern Canada Chapter of the Canada in a Changing Climate: Regional Perspectives Report to help inform and support adaptation to climate change in Canada’s North.

The new chapter highlights how addressing urgent societal issues ― such as housing shortages, education, food security and culturally appropriate health and wellness ― is deeply intertwined with efforts to build resilience to climate change. Canada’s North is experiencing a range of climate change-related impacts such as rising temperatures, changing sea levels, and the loss of ice and permafrost, which deeply affect all aspects of life in the North and will require unprecedented action. Indigenous Peoples have shown continued resilience over centuries; however, climate change is a continual and pervasive threat that will only exacerbate other stressors faced by northerners, such as social inequity and environmental issues.

The report is a part of Canada in a Changing Climate: Advancing our Knowledge for Action, Canada’s National Knowledge Assessment of how and why Canada’s climate is changing, the impacts of these changes and how we are adapting. The assessment reports raise awareness and understanding of the key issues facing our country and provide information to improve understanding and to support sound adaptation decisions and actions.

The Government of Canada is also working with partners across the country on the development of the country’s first National Adaptation Strategy, which will advance a cohesive, equitable and whole-of-society approach to climate adaptation in Canada.

Ensuring people in Northern Canada have access to credible, evidence-based information, combined with traditional Indigenous knowledge, will enable communities to make more informed decisions to prepare for, and respond to, climate change impacts in ways that work best for them.

A live-streamed event on December 7 will follow the official release of the Northern Canada Chapter of the Regional Perspectives Report. Hear directly from the authors about how climate change is affecting Northern Canada and how communities and sectors are increasingly taking action to adapt. An Inuktituk version of this news release is available by contacting Media Relations.

“Canadians are feeling the effects of climate change, especially in the North. Today’s release of the Northern Canada Chapter confirms that climate change  — from rising temperatures to a loss of permafrost  — is having a significant impact on      northern communities, peoples, biodiversity and habitats. The Government of Canada is committed to real and impactful action to help Canadians adapt to, and mitigate the effects of, our changing climate. That is why we have committed to bringing forward our National Adaptation Strategy by the end of the year, the first national plan to build a more prepared, resilient Canada.”

“Canada is warming at twice the global rate and up to three times the global average in the North. Important science-based information found in this report can help communities prepare and adapt to a changing climate. Adaptation is about being better prepared to respond to and recover from climate change-related events, reducing the impacts on Canadians and communities. The choices and adaptation actions we take today will help decide the future of our communities, our livelihoods, the environment and economy.”

“Climate change comes with distinct realities and considerations that are unique to Northern Canada. The release of this regional chapter underlines how important it is for climate change adaptation and emergency management efforts to be implemented together. Addressing climate change requires close cooperation across all orders of government, Indigenous leadership, industry and individuals. The Government of Canada is championing these efforts through the development of the National Adaptation Strategy and the delivery of the Emergency Management Strategy for Canada through a whole-of-society approach. The evidence from this report will continue to help inform our efforts as we work together to anticipate, mitigate and recover from the impacts of climate change.”

“Climate change is producing severe changes to northern landscapes and ecosystems. Indigenous and northern communities are most affected by climate change due to their relationship with nature, traditional lifestyles and geographic location. The release of the Northern Chapter highlights many of the challenges faced by northerners and Indigenous      Peoples who are leaders and innovators when it comes to climate change adaption in their communities. By working with Indigenous and northern partners, we can develop and implement locally-led, innovative solutions to respond to the challenges posed by climate change.”

“The consequences of climate change have been felt by Inuit communities in the Arctic for far too long, as they have had their ways of life, livelihoods and safety threatened. While many of these consequences are irreversible, it’s our responsibility to support northern communities as they adapt to these challenges in the best way they see fit. The Northern Canada Chapter of the Canada in a Changing Climate: Regional Perspectives Report is an important first step to identifying and addressing these urgent societal issues caused by climate change.”

“Parts of the Northwest Territories are warming four times faster than the rest of Canada, so climate action and adaptation are priorities for northerners. We have research, guiding documents and critical partnerships with Indigenous governments and organizations, and we are actively addressing climate change. This work can only be accomplished through partnership beyond the borders of the territory, and we continue to seek out opportunities to participate in and collaborate on activities at local, national and global levels.”

“Climate change continues to impact the North at a disproportionate rate to the rest of Canada. We are pleased to see the Northern Canada Chapter drawing attention to the importance of partnerships in strengthening climate resilience and the need for continued investment in climate change adaptation in the North. This report aligns with our calls to action through the pan-Northern leaders’ climate change statement, our recent participation in COP27 and our release of the Yukon Climate Risk and Resilience Assessment.”

“Climate change continues to impact the lives of Nunavummiut and northerners alike. Inuit have observed and documented the impacts of climate change for generations. Inuit Qaujimajatuqangit (Traditional Inuit Knowledge) has served to help us adapt to our ever-changing climate. The Government of Nunavut remains committed to understanding the climate change risks to our territory and continues to collaborate with the Government of Canada and its partners to ensure our realities are being captured in the development of Canada’s first, National Adaptation Strategy. Having equitable access to resources to help our territory adapt to these changes will ensure a quality of life that is on par with the rest of Canadians. We hope to bring more awareness to our territory’s challenges by sharing our northern perspective.”

“Climate change is deeply impacting the North and the Northern Canada Chapter clearly articulates the significance of the challenges we face, while highlighting how northerners are leading solutions and adapting to these ever-changing realities. This chapter captures how Northern Indigenous and western knowledge systems must be unified to overcome the challenges posed by a changing climate.”