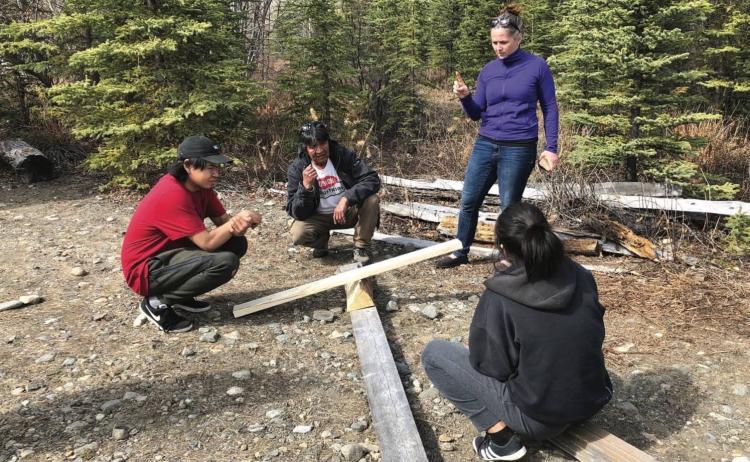 On a warm afternoon in early May, a group of students, instructors, and Elders gather around a campfire near a wall tent to talk about levers. By looking at the group, it would be difficult to tell that they’re in school.

They’ve spent an active afternoon throwing atlatls, building and testing catapults using rocks and logs, and pushing a wheelbarrow to explore how the load changes depending on where it sits.

One of the students, Dominic-Smith Johns, even tried lifting the side of the wall tent, using a long tree trunk.

“We’re learning science in a way that we can apply it directly to our lives – doing something as simple as being able to lift heavy things using a lever,” says Dominic-Smith. “It’s a lot more hands-on and that really keeps you focused on the topics.”

Nearly all of the course activities take place outside. They incorporate traditional learning methods to meet curriculum standards. For example, students learn chemistry through archaeology and brain tanning a caribou hide; they learn biology through butchering; and they learn physics by using carpentry tools and building an electric fence.

“We’ve come together with our Elders, language technicians, and science teachers to build the course,” says Colleen. “It’s inspiring to hear students say: Wow, if this had been taught in Grade 10, I would have gotten it.”

Steve Biggin-Pound is one of the instructors teaching the course.

“We tried to come up with scenarios that students will encounter in their daily lives, or in this case when they’re out on the land,” says Steve. “We wanted to use those examples to show students that they likely already use and have a lot of experience using these concepts, they just may not know the science principles behind them.”

The College plans to bring these types of land-based classes to other places in Yukon in the future.   Samantha Smith is taking the course to upgrade her science credit, so she can go on to further education.

“If it was in a classroom, I probably wouldn’t have taken it,” says Samantha. “But because it’s land-based, we can use some of the knowledge from our old people and integrate it into what we’re learning.”

The class has changed her idea of what she sees in her future.

“I thought I wanted to go into Earth Sciences, but now that I’ve done this and seen everything they found in the ice patch, which is on our traditional territory, it makes me want to go into archaeology,” she says. “I just find it really interesting.