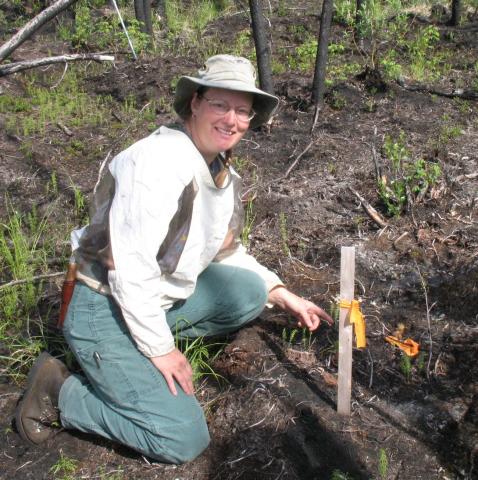 WATERLOO – Black spruce, an evergreen tree that dominates boreal North America, has historically demonstrated high resilience to fire, even depending on it for regeneration. However, a new study led by Wilfrid Laurier University’s Jennifer Baltzer and an international team of collaborators found that increasing fire activity due to climate change may lead to declines in this widespread and economically important boreal species.

The study, published on October 25th, in the journal Proceedings of the National Academy of Sciences, evaluated compositional changes following fire using data from more than 1,500 forest sites that burned in the last 25 years across boreal North America. Black spruce dominated most sites before fire but frequently lost dominance following fire. Whereas post-fire regeneration never failed in forests dominated by jack pine and broad-leaved tree species, forests dominated by black spruce failed 18 per cent of the time.

“Black spruce is a fire-adapted species and has dominated the boreal landscape for millennia,” said Baltzer, associate professor of biology. “But the cumulative effects of a drier, warming climate plus increased fire activity is pushing black spruce to the point that it’s not able to maintain dominance on the landscape. This is really strong evidence of a tipping point in this ecosystem that’s likely to shift it to a different state.”

Baltzer and her co-authors, including former Laurier postdoctoral fellow Nicola Day, found that two main factors made black spruce less resilient. The first is that wildfires are burning more deeply into the soil. The thick peat soil layer on which black spruce trees grow has historically prevented competitor species such as aspen and pine from establishing, but deeper burning is changing this. The second important factor is long-term climate moisture deficits. Forests in western North America were more vulnerable to change due to drier climate conditions, which can promote more frequent or severe burning or may modify regeneration conditions following fire.

Loss of resilience often meant that forests that were previously dominated by black spruce shifted toward a different tree species following wildfire. In more extreme cases, black spruce stands failed to regenerate at all and the post-fire end point was a non-forested state. Such changes in the land cover fundamentally impact the broader ecosystem.

“A black spruce forest has distinct properties,” said Baltzer. “Because of these properties, replacement of black spruce by another tree species or a shift to non-forest has implications for any number of ecosystem functions, from how much water is moving up through the trees into the atmosphere, to habitat for wildlife, to carbon cycling. These shifts from one species to another are happening throughout boreal North America, so we need to understand how this is going to change the way boreal forests function.”

The team’s research began at a workshop led by Michelle Mack at Northern Arizona University and was supported by NASA ABoVE’s Fire Working Group. It includes datasets contributed by government and academic collaborators from across Canada, the United States, New Zealand and the Netherlands. A key next step will be to extend these findings to the global scale.

“This study sends a clear message that fire activity is both stimulating and directing important changes in vegetation across boreal North America,” said co-author Dr. Jill Johnstone, Research Associate, Yukon University. “These systems, even those maintained in a largely natural state, are responding rapidly and dynamically to the combined effects of changing climate and fire.”

“This is absolutely a wake-up call that we need to be actively working to reach the point of net-zero greenhouse gas emissions to help stabilize the climate system,” said Baltzer. “The warmer and drier it gets, the bigger and more severe wildfires will be and the more of these ecological tipping points we will reach. We need to work together to avoid this future.”